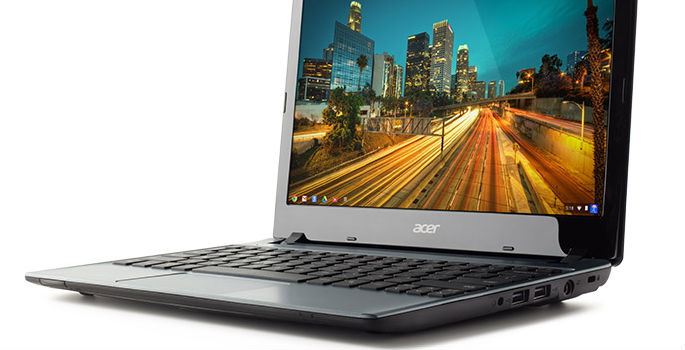 It was 7am, my eyes were weary as I pressed the power button on my 5 year old Dell computer. It had done me proud over the years but the 5-7 minute boot time and constant Windows updates, crash errors and freezing was fast becoming a hindrance on my workflow. After making a cup of coffee and finally loading my browser of which felt like a lifetime I was finally logged into my Google Business Mail.

As if by magic or probably the best marketing campaign ever I was met by an advert for the ‘Google Chromebooks. I’d heard of them, seen them but never looked into them. Like everybody we stick with the norm, the status quo and the system we have always used yet we all LOVE to complain about how shit it is.

I began researching the Chromebook and one thing which instantly struck in my mind was the price. £200 for an actual computer? Is this going to be a Fisher Price style kids computer? I kept reading, 100gb of free Google Drive storage for two years? Is somebody playing tricks on me? The price of the Google storage alone was £120. A day doesn’t go by when I haven’t yearned for a new computer yet it was never critical so the purchase never happened. The Chromebook changes the game and the thought process totally. £200 makes the decision an easy one.

From researching the Chromebook to pressing the order button it was on it’s way in an hour. With Amazon Prime delivery the Chromebook was in my hands the next day. 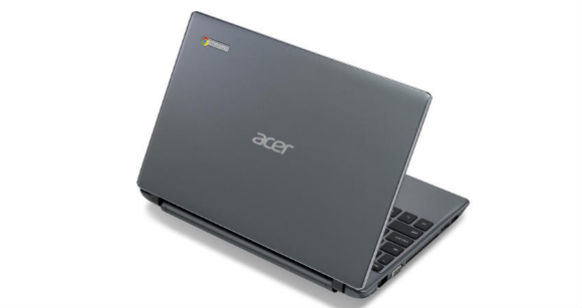 The Acer C7 has a nice charcoal finish.

Throughout the 24 hour period from ordering the Chromebook and it arriving on my doorstep I must have read 10 reviews. Although the reviews were great but I’ve never read someone describe the material a computer is made of in such vivid detail. I think most of the reviews missed the point of the Chromebook and why it was created.

The Chromebook is a computer of convenience, a machine of efficiency and an online markteers dream. Let’s not beat around the bush here the Chromebook was not created to rival Apple with it’s design. It wasn’t created to be the competitor of the Mac Book Air. For what it’s worth I actually think the Acer Machine looks nice. It’s slim, has a fantastic high res screen and a lovely Charcoal gray finish. But that’s besides the point and not the reason for buying the machine. I bought the machine to run my online properties and run them with organisation and proficiency. If this is also your goal then keep reading. If you like shiny things which look nice then get saving and stump up 10x the price for an Apple machine. I wish you luck with that.

The Acer C7 Chromebook runs the Google Chromebook operating system which is essentially the Chrome browser on crack.  EVERYTHING runs via your Google Mail for business or Gmail credentials. You log in with your Gmail username and password, you access files this way. If you’re cool with your life belonging to Google then the Chromebook is for you.

From booting the Chromebook to signing up, identifying wifi network and adding my 100gb of storage to drive approximately 2 minutes past.  The system boots for the first time in under 20 seconds. It shuts down and awakes from sleep mode in under 2 seconds with all your activities intact ready to roll again. I found the simple things like this incredible.

Adapting to the Cloud:

Making the transition to the cloud takes a few days to fully adapt. No menus, no Microsoft word everything is browser based. Initially you forget this and click around looking for these programs to no avail.

The best way to adapt to the cloud is to stick with it and focus on researching the replacement tools you require to get yourself operating in a business as usual way in no time. You also need to focus on the positives. Everything auto saves and nothing freezes or stalls. Chrome has crashed for me once and as soon as I reloaded everything reappeared as I left it. The device is also super, super fast. No daily windows updates, no need for running bulky operating systems. The power is all focused on making sure you get deliver your work.

Tools to make your Chromebook rock: 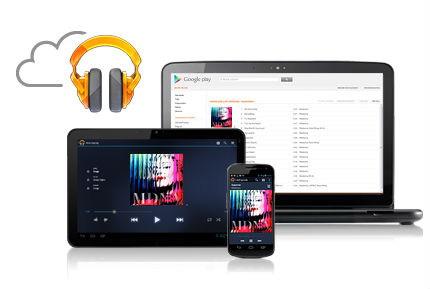 Worried about your music on your previous computer? Don’t be. You can upload 20,000 songs to Google Play directly from your itunes library for free meaning you have instant access to the files. If this doesn’t suffice then there is an additional download available called ‘Drive Music’ which allows you to listen to music uploaded into Google Drive instantly.

If none of this is good enough then the Acer version of the Chromebook comes with a 320gb hard drive for movies and music.

I have always used Tweetdeck as my twitter management tool. It makes conversations on twitter easier and allows you to reply, DM, RT and so forth easily and effectively. The Chrome version of Tweetdeck is incredible. Not only does it auto update (Hello It’s browser based) but it’s also extremely quick and syncs tweets instantly.

The desktop version is clunky towards the web based version and making the transition to using this via the Chromebook is easy. 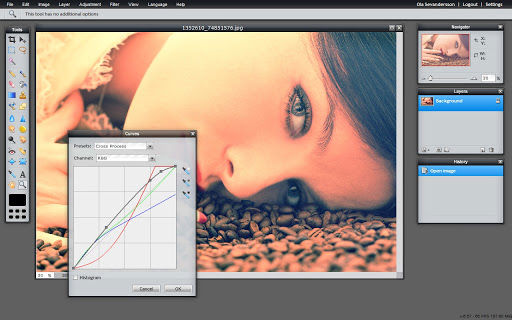 Web based Pixlr is perfect for image editing.

One of my main concerns when starting to use the Chromebook was the image editing capability. I’m no web designer or graphics designer so the need for robust software wasn’t a requirement however I needed a software allowed me to edit images on parity with Adobe Photoshop or Gimp Image editor. Welcome to Pixlr editor.

It looks like Photoshop, it works like photoshop and is also completely free! If you’re a blog owner or want to edit based PSD’s then Pixlr editor is a fantastic solution.

Everybody knows the power of Evernote. You can clip files, make notes, organise blog posts and sync with any device which you can access Evernote on. Having an amazing idea while out of the house? Log in via your smart phone and add it to your notes section. It’s an amazing solution.

By heart I’m an SEO so I love content and spreadsheets. The Google Apps tools are incredible. There’s not much difference between these and The Microsoft Office suite and Microsoft have had a few more years experience. The great thing about Google Apps is you can sync, share, and collaborate on material and jointly edit files. Sure you can do this on secure shared space with excel files but it doesn’t have the same ease.  I guest post on a number of sites so having the ability to easily distribute content and share documents via email addresses is pretty impressive.

At the time of writing Skype is not supported but apparently they are working on an app as we speak. There are workarounds for the messenger side of Skype which you can easily find however for video conferencing Google Hangouts are arguably better than Skype given more people can join. Most smartphones have the Skype App capabilities anyhow so if you desperately miss Skype then I suggest adopting this method. As i said before there are no real drawbacks it just changes the way you work.

For the novice web guys like myself then Codeanywhere is a perfect solution. As stated it allows you to code in the cloud from anywhere. All you require is a username, password and Google chrome. The cool feature with Codeanywhere is that it has an integrated FTP client so you can code some changes and upload instantly to your server. Not only is this pretty efficient but it’s also effortless.

I have had a few minor issues connecting to my ftp client however it seems like a solid robust solution. I wouldn’t say it’s a replacement just a useful extra while you’re on the Chromebook.

The main downside for me is the battery life. It isn’t brilliant at 3 hours but it’s not hopeless. I predominantly used the Chromebook in the living room on an evening while watching TV so a power supply is easy to reach. The Samsung Version which is available here has a much stronger battery life but is slightly more expensive and also has a smaller hard drive. But don’t let the battery life deter you. It’s a solid machine.

Secondary Computer or Your only machine?:

The beauty of the Chromebook is the price. We can never stray from the price. The machine is a dream for what you pay and should be considered by all.

I’ve been asked the question as to whether I feel the Chromebook would operate as your only machine and it actually depends on exactly what you do. For 90% of the time I think if you’re a run of the mill online worker like myself then yes it would work for your only machine however every now and then I require the use of Photoshop to create logos and other more technical imagery. For something like this you may struggle with the Chromebook. Don’t get me wrong the free image editors are powerful however Photoshop is a requirement from time to time. There is however a work around via the remote desktop access but this is a workaround and the Chromebook is here to improve efficiencies not vice versa.

Buy or not to buy?

The question is more…’Why not?’. The Chromebook works on so many levels. It’s small, it’s convenient, it comes with 100gb of free storage space and it’s also just £200 (Or $200 in the US). When I go away for the weekend to visit family I take the Chromebook, when I go on vacation i’ll take the Chromebook. You can access every single file just by having an internet connection (even that’s not required anymore).

To successfully work online it has everything you need and more securities which other computers cannot offer. It’s a safe machine and one which can enhance anyone who works online. I’ve been won over by cloud computing. Why not give it a try?