Jealousy of another woman’s success is stupid, pointless, and beneath us as women. It’s time to stop! Read on to learn why.

Written by Marne Platt, VMD MBA, President for Fundamental Capabilities Inc and author for Living Singlish: Your Life, Your Way.

It’s Saturday morning, and you’re drinking coffee with your friend Courtney, celebrating her big promotion. While you make happy noises for her, there’s an undertone. ‘What’s so great about her?’ you think. Somehow, it’s hard for you to be unreservedly happy for her. Why?

Society teaches us that there can be only one winner, that success is zero-sum game. Competition starts young. In school, we cut down successful or popular girls (remember the Burn Book in Mean Girls?) As we get older, we undercut the successful woman at work, or trash talk a friend.

It’s stupid, pointless, and beneath us as women. And we must stop.

Jealousy of another woman’s success is a safer way of expressing dissatisfaction with your own situation. It’s like redirected aggression in cats. One cat is upset that the more dominant cat takes her favorite sleeping spot. She can’t attack the dominant cat, so she attacks their owner. It’s a ‘safe’ way to show her frustration.

In the same way, jealousy over Courtney’s success is not about her. It’s about you, and what you don’t have. Why waste energy being negative? Focus instead on improving your own situation. Use her success as a spur and inspiration. 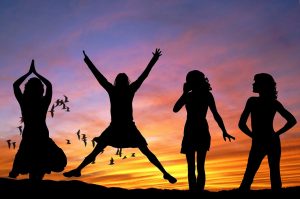 That’s the core of Shine Theory; the women around you inspire you to achieve more than you think possible.

Shine theory is about women lifting other women up, instead of tearing them down. It’s not a scientific theory; it’s common sense.

When I shine, you shine
Ann Friedman was the first to use the term. She posited that when you surround yourself with accomplished women, some of their ‘glory’ reflects onto you. Friedman says ‘surrounding yourself with the best people doesn’t make you look worse by comparison, it makes you look better.’

Surrounding yourself with superior achievers inspires you to up your game. Hang out with fashionista friends, and learn to build a more flattering wardrobe. Listen to your money-savvy friend talk about her investments, and learn to make your money work harder for you. Learning from each other, sharing experiences…isn’t that what friendship is all about?

Surrounding yourself with the best people makes you look better, not worse.

Taylor Swift, who shines brightly herself, believes in shine theory. “I surround myself with smart, beautiful, passionate, driven, ambitious women,” Swift said. “Other women who are killing it should motivate you, thrill you, challenge you and inspire you rather than threaten you and make you feel like you’re immediately being compared to them.” 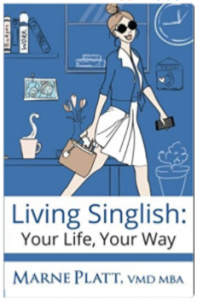 In Living Singlish: Your Life, Your Way you will learn from the experiences of other women, some of them famous and some of them just like you and me. Your self-esteem will grow. You will be independent, and confident, and you will love your life.

Shine at Work
Shine theory is even more important at work. Like it or not, other people consider your business network part of who you are. As women, we are often reluctant to seek out new contacts or tell people about our accomplishments. Hiding in your office is a good way to be left behind! Instead, we need to network -and not just with the people we see every day.

Find the women (and men) in the roles you want to have, doing the things you want to do. Get to know them, and try to work with them. Their expectations will drive you to do better work, which will improve your profile. Picture one of these powerful friends behind you, telling you what to say when you ask for your next raise. You might do better than you thought!

As Mia Holt, founder of The Lift Up Project says: ‘When I listen to podcasts or read books or see business run by women, it empowers me…if they can do it, so can I.’ Take that attitude into your relationships and you will see a difference. It’s far more positive than thinking ‘she’s successful – I hate her!’

This doesn’t mean choosing friends and business associates strictly by their net worth, their looks, or their job title. Find people that you genuinely like, especially outside work, who have made it to where you want to be.

Success is not a zero-sum game

When I Shine, You Shine
Success is infinite. Despite society’s outdated messaging, it’s not a zero-sum game. When we help other people succeed, we create new opportunities for everyone.

We’re all powerful women, and we become more powerful when we help each other succeed. If you feel envious of a friend’s success, admit to yourself, then let it go. Think about what you can learn from her path. One day your positions may be reversed. Think ‘When I shine, you shine’

Want to learn more about Shine Theory? Try this episode on Stuff Mom Never Told you.

I have built a great life but I made some mistakes along the way that you don’t have to make.  I realized that there are lots of young women like I was, and a few simple principles to follow. So I wrote it all down for you!

Marne Platt, VMD MBA founded Fundamental Capabilities after almost 20 years in the corporate world. Originally trained as a veterinarian, Marne reinvented herself several times, leaving clinical practice for the pharmaceutical industry, mastering roles in marketing, medical affairs and regulatory affairs, and becoming a global corporate leader. Along the way she developed a passion for helping women overcome barriers and reach their full potential at work and in life.